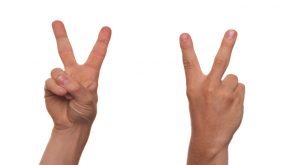 I recall one of the very first times I went to Spain to visit my wife’s family and was introduced to her ‘tía Maribel’. Maribel was chatting animatedly with me and mid flow, without any warning she stuck her two fingers up at me.

My immediate reaction was one of shocked surprise. Why? Because in the U.K., that gesture can have three meanings. Two are wonderful, one is terrible and it all depends on which way your hand is facing.

If the palm of the hand is facing the listener, then the gesture can mean Peace or Victory. In the U.K. you could go around all day sticking your fingers up at people that way and no one would take offence. However, turn your hand around with your palm facing you and the gesture is the same as ‘flipping the bird’ and in essence you are saying: ‘Go away in jerky movements’.

In Spain, and in the Spanish culture, the self same gesture simply refers to the number ‘two’.  So, all Maribel was doing was explaining that there were two of whatever it was that she was describing.

What struck me about that moment was that I realised that my own British culture had inbuilt into my psyche an unconscious reaction to that gesture. Even though I knew that Maribel wasn’t telling me to get lost, so to speak, I couldn’t help feeling quite put out about it all.

It was that experience that partially inspired this blog. You see, if you are in Spain, or any other country for that matter, and you get the gesture wrong, using something that is very negative or rude without knowing it, you can cause quite an unconscious reaction. And that can happen even if the people know you are not doing it on purpose!

Because of our conditioning, we can’t help but to take offence.

So, with that in mind, it really is worthwhile learning these insights into the Spanish culture and understanding which gestures are the most offensive. That way, if you have a similar kind of gesture in your culture that means something else, you can avoid using it whilst in Spain.

What is interesting is that raising the middle finger has exactly the same meaning in Spain as it does in the USA and other European countries. So, if someone is rude to you or cuts you up in traffic, this is the perfect one to show them your displeasure. Jaja.