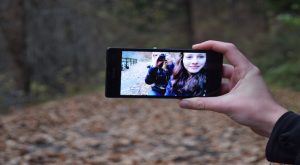 The truth of the matter is that, just like the majority of the Podcasts in this series, the idea behind this one on useful Spanish vocabulary came from one of our viewers who often comments on our videos in Youtube. He gave us a long list of all of the different kinds of body movement that there are and asked us to say them in Spanish. He even asked us to explain how to say: To take a selfie!

It’s because of this that we can say that the information that this Podcast contains as well as that in the corresponding Helpsheets is very ‘ useful Spanish ‘.

Did you know that there are more or less 100,000 words in the Spanish language? That means that we’ve all got a lot of learning to do! However, it’s not the case that every one of those words could be classified as ‘ useful Spanish ‘. So, rather than trying to learn every one of the blessed things, it’s far better to focus on what to you is really useful Spanish and to set about learning that.

There are lots of quick fix sites around that tell you that with only 1000, 2000, 3000 or even just 500 words you can speak with natives anywhere. Well, that is absolutely true and those people could never be sued for making false claims. However, the question is: What on earth would you be talking to them about?

Me Tarzan, Me hungry.

Effectively, trying to shortcut the learning journey (which is actually the fun part of learning a language) just leaves you with a Spanish that, to a non-speaker sounds fluent and to native speaker sounds like you are Tarzan.

Now, I’ll be the first to say that if you don’t mind that at all, then those kind of courses are perfect for you.  What we must bear in mind, however, is that when most people talk with someone in their own language who speaks badly, they make a judgement on that person’s intelligence and IQ level. (It’s scientifically proven.)

What we aren’t saying is that these courses aren’t worthy of consideration. They are actually great at building your useful Spanish vocabulary really quickly. The only issue is that you mustn’t leave it there.  These are courses to be built upon, expanded, clarified and developed.

Listen in to the useful Spanish in this Podcast.

In this Podcast we present a whole host of really useful Spanish on movement. Why not take the information and place it on flash cards and repeatedly practice it until it becomes second nature? There are lots of apps that allow you to add information and then learn it through repetition. It’s certainly worth a go, isn’t it?