Mucho or Muy in Spanish? 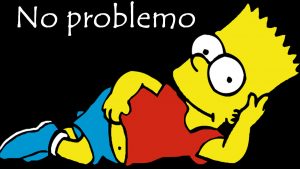 Over the years we have noticed that when faced with choosing between Mucho and Muy in Spanish, many students get very nervous and unsure.  If we’ve heard ‘Mucho grande’ once over the last 15 years, we’ve heard it a thousand times. But why? Well, the truth is that in the media many people, in their attempt to show off their Spanish speaking prowess, make glaring errors that the rest of the world picks up on.

A perfect example of this is the ‘No problemo’ catch phrase used by Bart Simpson. One supposes that the original idea was to make an ironic inside joke of an American using Spanish incorrectly. (It should be ‘No problema’.)

Here’s another example of the same kind of issue and one that brings us back to our original theme of Mucho or Muy in Spanish. I recently watched an animated film with my son called: The house of magic. One of the characters in the movie is a small dog that speaks with a mixture of Jive and really bad Spanish. (I’m not sure if Jive speak still exists, but if it does, this dog uses it!)

At one point the dog says: ‘Mucho grande’ which, if you are a student of Spanish, you will recognise as a load of rubbish. The issue is, however, it’s a key line in the film and unless you know otherwise, you might think that that’s how you say ‘very big’ in Spanish. So, as you can see, we are up against it here.

Despite what you may think, however, the difference isn’t so confusing between Mucho and Muy in Spanish. Mucho means ‘a lot’ and Muy means ‘very’.

So why the confusion? Well, we get ourselves into a muddle with the way that the Spanish language structures sentences like:

I am very thirsty. – Spanish structure: I have a lot of thirst.

I am very frightened. – Spanish structure: I have a lot of fear.

What’s interesting is that although in Spanish it’s possible to say:

it is not the way these sentences are made in day to day speech. Rather Spanish speakers say:

Join us in this Podcast as we talk you through all of this and offer you some practical examples of how to use these two words correctly. In addition to that, we cover the frequent mistakes with Más too.