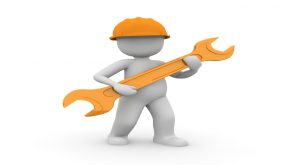 In this podcast Cynthia and I realised something very important. That was that the verbs with DES in Spanish don’t always have a logical explanation to them.

Of course, we have the same kind of verbs in English, only in English they tend to have many and varied prefixes. Sometimes there’s a pattern, sometimes there most certainly isn’t.

So, let’s take a look at some of the verbs that start with DES in Spanish and see how they work:

Here we have an example of a verb that starts with DES in Spanish and in English.

What is interesting about the verb Destruir is that it has its antonym/antónimo in Construir.

So, as we see, by changing the prefix we change Destroy into Construct. Perhaps it will be easier to see the connection by looking at these words:

Can we do that each time?

So, the question is, ‘If we can create the antonym of this word by whipping off the DES in Spanish and adding CON, can we do that with all if the verbs that start with DES in Spanish?’

The simple answer is NO!

Take a look at these examples:

This is a stand alone verb and ‘Conmayarse’ doesn’t exist as a word. Rather the antonym of the verb ‘to faint’ is: Recobrarse or Recuperarse.

In this example, we just need to take off the Des in Spanish to create the antonym which is Hacer= to do.

So, unfortunately, there is no hard and fast rule to know what to do with these verbs that start with Des in Spanish.  There are some patterns but, for the most part, they cannot be counted on every time.

It’s the same in English.

Of course the same thing applies to the Dis verbs in English too.  Sometimes you can take the Dis off and you get the antonym. Here is an example:

However, there are just as many exceptions:

Learn the verbs with Des in Spanish one by one.

The bottom line is that, just as we do in English, in Spanish we will have to learn each of the verbs individually.  There really is no hard and fast rule that will help you out.

In this podcast we will be doing our best to highlight some of the key verbs with Des in Spanish. In the Helpsheets there’ll be even more!