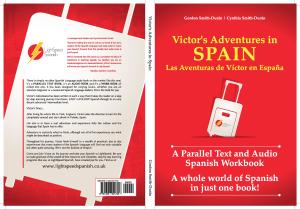 As part of the comprehensive Spanish learning program we offer in our Parallel text book which comes out in December of 2014, we are very happy to offer a ‘speed learning system’ that has a proven track record of helping learners quickly build up their language skills.

I’ve probably mentioned this before, but I think it’s important enough to repeat myself again. (For emphasis, of course jeje.)

When I first started learning Spanish I stumbled across a learning system like the one we use in LightSpeed Spanish. It was designed to help me learn, what seemed to be at the time, an impossibly long list of Spanish words.

However, I was amazed to find that after just a very few days I had managed to memorize the entire list!

I was initially euphoric, believing that I had found the way to be fluent in Spanish in a very short space of time. That euphoria soon gave way to frustration, however, when I discovered that the designers of the learning program had made a glaring mistake.

They had only given me TWO verbs conjugated into first and third person! These were Tener (to have) and Querer (to want).  So, unless I wanted something or I had something, I was stuck. Oh, I knew the names of lots of things, but what was I going to do with them? I couldn’t go along the street shouting words like: ‘¡Vaca!, ¡Silla! ¡Abeja! So, although I was convinced that the system worked exceptionally well, I was frustrated that the makers of the learning program hadn’t considered it necessary to give me a few more action words.

The True Structure of Language.

I often compare language to the human body.  I imagine that the flesh that surrounds the bone structure is the vocabulary that we learn; the words, names, describing words etc. However, the grammar that holds everything in place and in an orderly fashion is the skeleton, the strength of our language.

What would a body be like if it had no skeleton to hold it up? It would be a floppy, unrecognisable mess. (Like an octopus out of water!) The same applies to Spanish if it has no structure or form to it. It becomes messy.

I have often heard people talking in both Spanish and English and making a complete pigs ear of it. They have plenty flesh on their language but no shape or rules to it and so they go about plonking their words into ungainly sentences that often make little sense.

Everything Hangs off the Verbs.

For this reason, we have produced a series of videos that complement our book “Victor’s Adventures in Spain” and provide most of the common Spanish verbs that figure in the story. We used this Speed Learning System to help you quickly assimilate the verbs into your vocabulary and begin to use them with skill and dexterity.

We recommend that before you read the book you work your way through these common Spanish verbs builder videos so that you will  sail through the story with the greatest of ease.

You can find the remainder of this series in: