Either Or in Spanish. = O O 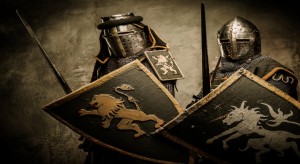 Maybe you’ve seen these words used before in your travels through your learning journey. They are strange because they appear as the same word and yet translate into English as different words.

This is often what happens when we try to translate things literally from our own language into Spanish. Sometimes it works beautifully and other times it’s “un desastre”.

So, when you use the “O O” in Spanish, which means either or in Spanish, you are simply presenting options or choices.

Just as an aside, many times when Spanish speakers say yes or no, with emphasis, they often put the word QUE in front.

What they are really doing is shortening a longer sentence which would go something like this:

NI NI = Neither Nor

Just as there exists either or in Spanish, another of these double words that doesn’t translate directly was made famous by the Monty Python team in their famous film, “The Knights of the Round Table.” In that film, there were the ‘Knights of Ni’. They would go around shouting “Ni, Ni!” (I don’t think that they really thought they were using Spanish! Still, it’s a nice way of remembering it.)

So, this expression is used with negative sentences such as the following:

No quiero ni agua ni zumo. = I want neither water nor juice.

We don’t really talk like that in English any more and the ‘Either Or’ option is normally what we use in all cases of spoken language. However, In Spanish, when your sentence is in the negative, you must use the Ni…Ni version.

We do the same by the way.

If you are asking yourself how Spanish speakers can use the same word when we have different ones, then it’s worth noting that we do the same.

Take, for example, when we say “AS big AS a house.”

So, listen in as we show how these expressions work in Spanish in conversation. Everything that we present in our podcasts is backed up with comprehensive helpsheets that help you look more in depth at what we talk about and then test your understanding with an exercise.

As always, we hope that this will be of value to you in your learning journey.