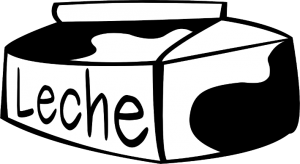 The first thing to make clear when we talk about Spanish insults is that we are talking about the way insults are used in the Spanish mainland.

Every country has its own way of using insults. In some countries in Latin America, for example, everyday, easy on the ear swear words from Spain would cause tremendous offence.

When learning these expressions and words, please use them with care and do not drop them, willy nilly into conversation unless you know that the person you are talking to will not take offence.

There are some very light words that are used extremely frequently in Spain. Let’s take a look at the word ‘leche’ or milk.

On the face of it, it would seem that this is a fairly innocuous word. However, it has its place in this list of light swear words.

If you get a shock, then you are well within your rights to shout: ¡Leches!

This is the equivalent of ‘Goodness!’ or perhaps, ‘Holy cow!’ or if in frustration, it could mean ‘Bugger!’ or ‘Bloody hell’.

When someone is in a bad mood, or perhaps has a bit of a nasty side they can be described as ‘having bad milk’.

example: Qué mala leche tienes! = You’re very nasty. or, You’re in a bit of a bad mood, aren’t you?

This is also used in friendly banter when a pal has said something to make fun of you or has been brutally honest with you, you can say the above sentence in a jokey way.

I personally think one of the strangest things about Spanish insults is the way they seem to be obsessed with having a poo in things.

For the moment, however, let’s look at the light version, which is in the milk.

When you want to express surprise or shock, or amusement, or irony or really, any reaction to an event, then you can begin to poo in places.

To do this you say…Me cago en..

This comes from the verb, Cagarse, which means to poo oneself.

The lightest version is: ¡Me cago en la leche! which translates very much as: Well, goodness me! or Good grief!

I’m constantly amused that this is light given that it involves the act of having a poo in or on something. Yet, mums use it with their children all the time.

¡Qué guapísimo eres, me cago en la leche! = What a handsome boy you are, for goodness sake.

As bizarre as it may seem, this is probably one of the most popular swear words in Spain and so, expect to hear it often and in all of it’s versions. We’ll cover them in the next podcast.

So, enjoy the podcast and remember, these words are better to be used as reference only until you know how to use them correctly. Misuse often offends. jeje