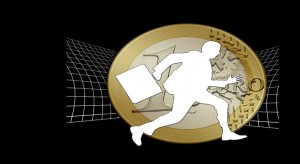 What is La Crisis.

Talk to any Spanish person about the Spanish economy and you will hear the words ‘la crisis’ within their first few sentences.

In fact, talk to any Spanish person about anything and you will still find them mentioning the Spanish economic crisis very early in the conversation.

What is it all about?

I’m no expert, but from what I am told and what I have seen, Spain has gone from boom to bust in the last five or so years.  As we turned into the millennium, Spain’s construction industry was working at the top of their game.

The banks were pouring money into businesses and the whole financial infrastructure was buoyant and positive.

Then, for the reasons that only they know, the banks suddenly stopped the money flow.

The knock on effect.

All good business is built on the speculation of new ventures, supported and backed financially. Particularly in construction, payments for work done are typically made after the event and so, the big and small companies rely on the banks to support them during the building process with the promise of pay-back after the job has been finished.

When the banks closed their doors to the support of any new business, the entire industry literally ground to a halt. Nobody could pay for the goods they had ordered, the work that was to be done and quite often, the wages of their workers.

Before the crisis hit, the majority of Spain’s business were there to support the construction industry or, tourism, another important strand to the economy.

Suddenly, the vast majority of the construction support businesses got into financial problems and closed.

The impact on Spain’s economy and on the population has been catastrophic.

The more the country saw a decline in construction, the more it began to affect other sectors of the Spanish economy. Money was no longer pouring into the government coffers. Municipal councils were finding it difficult to pay their staff. The ratio of civil servants to workers in private industry became worryingly unbalanced. There simply wasn’t enough money coming in to cover all the costs of running the country.

So many businesses have closed that there are millions upon millions of people ‘en paro’, without work, and the number keeps growing. The vast majority of the people unable to find work are under thirty and very angry.

In fact, if I was to describe the ‘ambiente’ in Spain right now I’d say it was one of anger and frustration.  The people are furious at was has happened to their country and what is now happening to them.  In the attempt to reduce costs, the government is cutting services on all sides and what was never a terribly generous government has had to become careful to the point of being ‘tacaño’.

Light at the end of the tunnel?

This remains to be seen. When you listen to the podcast of Mercedes and Maribel giving their perceptions of ‘la crisis’, pay special attention to feeling they project of real confusion and annoyance at what is happening. Spanish people love their country and are very proud of its rich culture and heritage.

This makes them all the more sad when they see what is happening to everything they love these days. They blame the government, yet the government has probably been just another victim in this affair. Until the banks begin to open their doors again and flood the market with ‘dinero’, things are going to remain the same.

Ahora estoy bastante deprimido jajaja.  We can help, of course, by supporting Spain’s tourism industry. Spain is a fantastic place to visit and if you have never been, then my recommendation is that you go there sooner rather than later.

You will certainly not be disappointed with the experience.