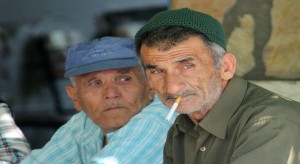 Is it so different?

Given that Cynthia and I are from different backgrounds, (I’m British and she is Spanish.) we have been able to appreciate some of the key differences between the two countries.

Culturally, we are similar in many things and yet in others we couldn’t be more different.

In the Podcast we cover a number of areas in which we are different, yet in this Blog I would like to focus on one particular area of British and Spanish culture and that is, POLITENESS.

If the British are famous for one thing it’s their Hooligans and their Politeness. (Two things actually.) Putting the hooligans to one side, let’s focus on our politeness.

We do love our PLEASES just as much as we do our THANK YOUS.

The Spanish, however, are not so big on saying please and thank you. In fact, we British really do annoy them with our almost anally retentive need to bolt a ‘please’ onto every ‘yes’ and a hearty ‘thank you’ after each ‘no’.

The Spanish, on the other hand, typically (if you’re lucky) give you a ‘please’ at the beginning and a ‘thank you’ at the end of each transaction. In between, a simple ‘yes’ and ‘no’ is quite enough for them.

And that works beautifully well in both countries.

Put a Spaniard in English culture or an English person in Spanish culture, however, and everything goes “patas arriba”.

In the U.K., replying with a curt ‘yes’ when being asked whether you want something is tantamount to breaking wind in a lift. Any Brit worth their salt would be deeply offended and consider it extremely ‘rude’ behaviour.

In Spain, repeating ‘yes, please’ ad infinitum makes a Spaniard suspicious of your motives and they might even think that  ‘ le estás tomando el pelo.” (You’re making fun of them.)

And so it’s these subtleties of the English and Spanish culture, or any culture for that matter, that can be very important to know.

Another interesting difference along these same lines is the Spanish ‘TUT’.

This is done when a Spanish person wants to say ‘no’. Sometimes, rather than saying ‘no’, they simply make a tutting noise two or three times and wiggle their finger from side to side.

Here in the U.K., this same action doesn’t mean ‘no’, it means “BAD PERSON/ACTION”. It’s a sign of disapproval.

The possible outcome of this double meaning.

So imagine the scenario: I ask Cynthia (true story) if she would like a tea. She answers me by looking at me with ‘desprecio’ and tutting whilst waving her finger at me.

As a Brit, I am flabbergasted that she can be so rude as to disapprove of my offering her a tea. What’s so wrong with a tea? What did I do to deserve that?

Of course, Cynthia is completely oblivious to my extreme reaction and thinks that she has simply refused a tea. She spends the rest of the day wondering what on earth has gotten into me.

And so, like this, onwards we went through the last ten years stepping on each others cultural taboos until now we just laugh at them and wonder how many more we will stumble across.

We are moving to Spain in a couple of years (the summer of 2016) so no doubt it will be my turn to tread on a few toes.