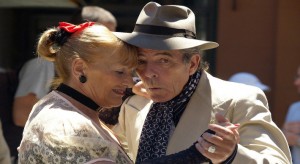 Which one do I use?

The question of “(Tú) Tu vs Usted” is always on the mind of students, especially when they are learning Spanish from Latin America.

Most of us will know that the difference between Tú and Usted is simply the level of formality or politeness you want to maintain between you and the person you are talking to.

In Spain, for example, once you are on talking/friendly terms you will “tutear” with that person. In fact, were you to continue to use Usted with someone, they would find it a bit strange. It would be like you were saying to them that you didn’t want to be friends with them.

Many things to many people.

Just because that happens in Spain, however, does not mean that the same applies throughout the Spanish speaking world. Not at all!

Certainly in many countries in Latin America, talking to someone in Usted is expected. Children to parents, work associates. In fact, some cultures expect you to use Usted with everyone, even with close family members and friends.

So, how will I know?

Until you are very skilled at Spanish, it’s safer to use this system.

How to manage the situation.

There are ways that you can manage the way someone talks to you. For example, if someone is talking to you in Usted and you know that in their culture it’s acceptable to talk to one another using Tú, then you can say:

No me trates de usted.

Another way of saying it is to say:

Tutear is the verb used to describe the act of talking to someone using Tú. Thus, this sentence simply means: Can I talk to you using Tú?

Use Usted as your default.

As a rule of thumb, it’s always best to address everyone you meet with Usted. Then, if you feel that there is a level of confidence growing, you can use the above phrases. However, the best thing is to take the lead from the person you are talking to. Let them guide you. You can be sure that if they want to use Tú, they will let you know.

They may do that by spontaneous changing to Tú during the conversation or they will tell you directly.  However, if they seem comfortable using Usted with you, then stick with it.

We hope that has helped to clear up a little confusion regarding the Tu vs Usted question.