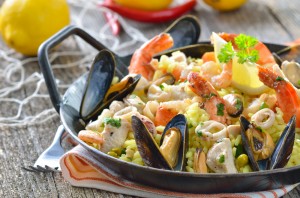 The Mediterranean Diet is renown throughout the world not only for its delicious dishes but also for its health benefits.

In this podcast we hear from Mercedes, la madre de Cynthia y de Maribel, su tía, who talk us through what they perceive as the typical Mediterranean diet.

The challenge in this podcast is understanding just exactly what it is they are saying. Normally, at this level you have been listening to Cynthia and I. You have probably become accustomed to our voices and the expressions we use.

Now we have two new people with different voice tones and new idiomatic expressions. For this reason, it’s worthwhile suggesting that you have a number of attempts at this one.

Listen to it at least three times unless, of course, you captured everything beforehand. Fortunately, both Mercedes and Maribel speak very clearly and at a moderate speed and so you should find it fairly straightforward to capture the idea of what they are saying.

Both Mercedes and Maribel are wives and mothers and have spent many years preparing a wide range of food for their families. Because of this fact, they can be classed as experts on the subject of what we know as the Mediterranean Diet.

One of the things that I personally have noted about a typical meal with our family in Spain is that there are always many different flavours and varieties of food.  The table is littered with various types of salad, vegetables and a range of tastes that far exceed anything that I have experienced here in the U.K.

The other interesting part of eating in Spain is that there always seems to be far too much food (and there is) for the amount of people at the table.  Once the meal is done then all the surplus food goes back into the fridge to be eaten later.

Probably, the biggest fear that any Spanish mother has is that there isn’t enough food to go around.  So important is it to eat heartily in Spain that you can almost guarantee that if you opened any fridge in Spain it would be loaded up with Tupperware filled with the left overs from meals earlier in the week.