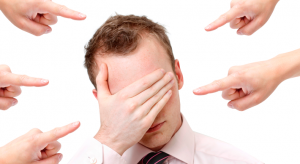 Let’s take a look at one of the important Spanish sayings that describes feeling shame or embarrassment but not for oneself; vergüenza ajena,  Who hasn’t felt vergüenza (shame) before? In particular ourselves as language students, as we test our newly acquired Spanish skills only to find out, all too often, that we’ve said something terribly rude, risqué or both! ¡Todos hemos estado allí!  It’s certain that each of us have experienced our personal shame, another of the popular Spanish sayings, which is-“verguenza propia” or, simply “vergüenza”.

But, did you know there’s another type of shame?  One in which you do not feel shame for something you’ve done, but rather shame on behalf of someone else?  To describe this you would use; “vergüenza ajena”.  This vergüenza can be experienced as pure shame or embarrassment, making you laugh or irritated, or it could be experienced as “pena” (pity/sorry) for the other person.

Not sure you’ve ever experienced it? If you’re familiar with Ricky Gervais’s sitcoms you’ll be very familiar with this feeling.  Or if you’ve ever watched one of the programmes in which people clearly think they know how to sing, dance… only to find out they are terrible at it. How did you feel when they were giving their best? Yes! There! You felt vergüenza ajena, or “Spanish shame”!

This is a normal emotion for any human being who feels empathy: you put yourself in their shoes and you can feel it too as it if were happening to you. Check out this funny sketch from Fawlty Towers, another series that causes ‘mucha vergüena ajena’.

So, what does “ajena” mean? Something “ajeno” is something outside of us or something belonging to someone else. It’s the opposite of “propio”, which means your own.

“Sentir vergüenza ajena” is a phrase commonly used in the Spanish speaking community, so it’s good to know it exists!

I will show you some examples:

–        The main character acted to badly that I felt ashamed on his behalf.

–        I felt embarrassed on his behalf when they all laughed at him.

Empathy. What a beautiful gift for the human heart!

For more interesting looks at nuances of the Spanish language, why not join us in the LightSpeed Spanish Facebook group?