Naturally, when travelling through your Spanish speaking country, you are going to need to stop for some 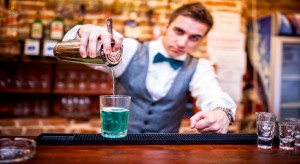 refreshments. Being able to manage your way around a Spanish bar is nothing short of “imprescindible”.

Every country has its bar culture, and none more so than that of Spain. In fact, there seems to be a big misunderstanding about alcohol consumption in Spain.

Many people confuse the fact that Spanish bars are often full to the brim with noisy Spaniards drinking beer and eating tapas and imagine that there is a lot of drinking going on. Actually, they couldn’t be further from the truth.

What happens, in reality, is that Spanish people spend far more time in their bars than other Europeans and yet they drink far less. In the ten years that I have spent time in Spain, I can recall only one time that I saw someone drunk. Even at four o’clock in the early morning on New Year’s Eve (la Noche Vieja) everyone was still quite sober.

What it’s all about in Spain is not drinking for drinking’s sake, or drinking to get drunk, but rather it revolves around the pure enjoyment of savouring good beers, or wines and eating tasty little snacks along the way.  It’s not uncommon for the Spanish to pop into their local bar twice a day for a little beer and some tapas.

If you watch what they drink, however, you’ll notice that the typical ‘caña’ glass of beer they order is less than a half pint. Either they order one of those, or a ‘botellín’ which is what is often called a ‘stubby’ bottle, the smallest bottle of beer available.

It’s for this reason that it’s quite common to see Spaniards drinking a beer at lunch in their work break. At first, it used to seem a little extreme to me, and I’d heard the stories of the construction workers having a shot of  ‘aguardiente’ before they went up to the scaffolding.

The difference is that that was what they had, one shot, and not half a bottle! Certainly, in many other European countries, we have much to learn from the Spanish bar culture and their view of how to enjoy alcohol.

In this free Spanish lesson we have distilled much of the key vocabulary that will help you order drinks like Spanish speakers do. ¡Salud!

Of course, all the additional information and guidance can be found in the comprehensive Spanish help-sheets.

Video of This Spanish Lesson