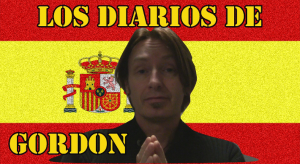 Gordon’s Diaries or, Los Diarios de Gordon is a new project for LightSpeed Spanish designed to offer help in a couple of ways to our students. Firstly, it’s a test of your listening skills.

If you can grasp all that I say, then you are well on the way to having a great level in Spanish. However, in addition to that, I aim to offer some insights into the Spanish culture that perhaps you won’t find in a conventional study book. Click HERE to view the entire playlist.

I’ve been going backwards and forwards to Spain for the last 11 years which, although it certainly doesn’t make me an expert on all things Spanish, has allowed me to see into the real culture of Spain.

It’s one thing to go to Spain and spend a couple of weeks staying in a hotel and visiting places of interest and quite another to live with a Spanish family in a normal suburban area. I guess I’ve had the pleasure of seeing what a ‘typical’ (if that really exists) Spanish family does and how they interact and think.

And it’s this kind of information that I aim to inject into these video and Spanish audio diaries.

The differences and similarities

What I’ve see are the many differences that exist between my culture which is northern British and that of the Madrileño.  There are many and yet, not so many as to create a yawning gap between the two cultures.

It takes a while to understand Spanish humour, for example, but it takes only a very short while to realise that much of our English humour is lost on them.

Here in the UK we blithely make jokes about death or misfortune without blinking an eye whilst that same humour in Madrid is seen as morose and terribly uncaring. I’ve seen many shocked and confused faces caused by what I have said or because of the English jokes I have tried to wrestle into Spanish.

When it comes to sex, the uptight British reserve would be quite literally blown out of the water in Spain. Be prepared to hear the most shocking things said over the dinner table that would only be talked about behind closed doors in the UK. The interesting thing about Spain in this regard, however, is that although they have far more cultural freedom to discuss taboo subjects like sex, for example,  it doesn’t make them more sexually promiscuous as a nation. According to the stats, the Spanish are in fact far less sexually prolific than the uptight Brits. (Just watch the series Ibiza uncovered and you’ll see only too well how a bit of alcohol quickly loosens up everything British!)

So, keep watching out for this series of Spanish audio videos and see what you can learn from them.  And as a disclaimer, please don’t believe everything I tell you….after all, it’s only my opinion.

Click here to see the entire playlist of Gordon’s Diaries.