Spanish as a second language. A fantastic 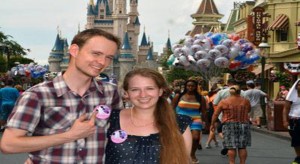 In this interview, recorded in a small café in Toledo, we talk to Michael Smith (also known as Michael Smithingtonsworthly on Facebook) about his experiences here in Spain during his two week stay with us in the region of Guadalajara in the outskirts of Madrid.

Michael has been instrumental in helping us grow our Internet presence over the last 18 months and has worked tirelessly to get us on the first page of Google searches for Spanish language resources. We can’t thank him enough.

So, as a way of showing our appreciation and to finally be able to meet him face to face we invited him and his fiancée to Spain to spend the summer with us this year.

Once you have seen the video, you will no doubt be wondering what Michael did to get such a strong and competent Spanish. You may be surprised to know that at the time of the interview he has only been learning Spanish for three years.

However, by no means have they been three casual years of learning. Rather, Michael has used a tremendous amount of effort and money to get his Spanish to where it is now.

We’ve talked about this method of learning before. Piggy back learning is using time you already have to learn. One of the greatest challenges for anyone is finding extra time to learn and study.  With this system, you don’t need to find extra time in your week but rather, you use dead time that already exists.

For example, Michael works quite a distance from his home and drives for two hours a day, five days a week. Rather than wasting this time listening to the radio, or lost in his own thoughts, he has converted his car into a classroom and listens to Spanish Podcasts or Spanish music whilst he drives.  This has given him 10 hours a week of learning, five times more than the average student!

Now on his fourth or fifth book in the series, Michael has read all of the Harry Potter books out loud, a slower process than reading silently, yet massively beneficial for improving your spoken Spanish. You only need to listen to how clearly Michael pronounces to see that this system has been un éxito total for him.

Michael has worked on the principal of immersing himself completely in the learning process of speaking Spanish as a second language (and becoming a little obsessed with it) . We suggest that if you, too, want to really move your Spanish forward at LightSpeed, then you should take a leaf out of Michael’s book (and then read it out loud jeje).

Today Michael and Emilie, his fiancée left for los Estados Unidos after two weeks with us.  We wish them a safe journey and want to say a big thank you to Michael for all he has done for us.