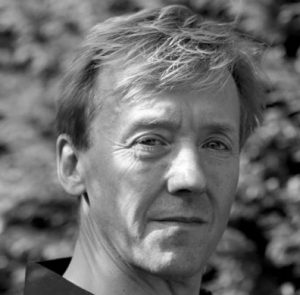 We met Peter Løvstrøm only a short while ago. He contacted us after having purchased some of our help sheets and talked about his passion for the Spanish language and that he loved speaking Spanish in his town of Brighton where there are reportedly, 50, 000 Spanish ex-pats living at the moment.

In his message, Peter mentioned his acting career and the fact that his acting training had helped him a lot with his language skills. I suppose it goes without saying that after having spent your entire career focussing on the nuances of language as well as playing with accent, then learning to pronounce a new language would sit fairly comfortably with you.

Always on the look out for new people to interview and armed with a new program to record Skype sessions, I barefacedly asked Peter if he would be willing to give us an interview that we could upload to Youtube and to our page.

Not giving it a second thought, Peter agreed and after having talked with him for virtually two hours (which flew by in a trice) I understood why he so readily agreed to talk.

What came across to me within seconds was that  when it comes to speaking Spanish and learning the language, Peter Løvstrøm  is probably the most demonstrably enthusiastic person I have ever met!  In fact, in all aspects of his life he demonstrates an unbridled passion for what he does. He lists his hobbies like he was reading from an a la carte menu, and talks animatedly about his acting career, learning Spanish, exercise, reflexology, the Ukulele, cooking, travel, coaching young actors and so much more.

Despite having acted in many films such as “The Meaning of Life” with Monty Python and having appeared in most of the important theatres in the UK, he really doesn’t talk too much about that side of his life. Although he still acts, his focus seems to be set on self improvement and helping others.

Peter is completely self taught when it comes to his Spanish and has done an excellent job with it. Of course, like us all, he still has many doubts and confusions and quite literally bombarded me with question after question during our session on all of the areas of his Spanish that were less clear.

For me, having this kind of student is paradise. In those sessions, time quite literally flies.  An hour can pass in what seems like a minute or two.

As you listen in to Peter’s interview, pay special attention to when, toward the end, he begins to talk about his Reflexology. Notice how, because of his enthusiasm for his work, he goes into flow and starts talking at another level. It’s very interesting to watch and hear!