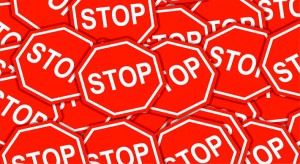 A great frustration for any student of the Spanish language is the range of options that present themselves “a la hora de” look for the appropriate way to say STOP in Spanish.

The issue has to do with the way we use the word STOP in English and the way they sometimes use STOP in Spanish. As we have all found out to our disappointment and frustration, it isn’t always possible to make a direct translation from English to Spanish.

At the beginning, when we have little experience of the structure and melody of the Spanish language the best we can do is to create our sentences by reproducing word for word the English sentence that we have in our mind.

How they use DEJAR

The interesting thing about this verb is that it really doesn’t mean, TO STOP in Spanish. It actually means TO LEAVE. Now, this could seem to be a strange way of saying STOP unless you think of it in the way Spanish speakers do.

Which in English can really only translate as:

I have stopped smoking.

However, in Spanish it really translates as:

I have left (behind) smoking.

In English we might say something that has a similar feel to DEJAR which would be:

I have dropped the habit of smoking.

So, although DEJAR has a slightly different meaning, it can still be used to say to STOP in Spanish. At the same time, the same verb is used to say to LEAVE. For example:

So, it’s these subtle differences in meaning that can catch us out at the beginning. However, you soon start picking up the feel for verbs and how they are used.

Direct translation is the system used by many beginners as that’s the only way they can communicate, and there are some great online translators that manage to give you a reasonable result. You must be careful, however, not to trust that what they give you is what you wrote in English. We have had the displeasure of having to mark essays written in English and then translated with an online translator which were, quite frankly, a pile of poppycock! (¡Una tontería total!)