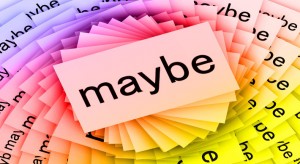 For us to study the Spanish Subjunctive, we must also understand the way we refer to the present tense. It’s called the “indicative”, which is purely the present tense, the one that we learn when we first begin to study Spanish.

Now that we have gotten into the meat of this subject, we can start looking at the real triggers that signal the need for the present Spanish subjunctive.

Probably, the most common element in 90% of all subjunctive sentences is the word QUE. As I explain in the video, QUE is I heavily worked word in Spanish and often causes confusion with students as they see it appearing “por todos lados” in their studies.

If you want to refresh your understanding of QUE, then why not take a look at our video blog on this subject.

What you must be cautious of, however, when working with the Spanish subjunctive, is not to imagine that it’s QUE  is the only word that triggers it off.

Rather, it is the appearance of QUE with other sentence structures that normally creates a need to use the subjunctive.

Here’s an example of how it works most times :

So, as you can note, the Spanish subjunctive appears in the verb that follows the trigger and not in the trigger itself.

Two or more in a row.

Of course, the exception to this suggestion is when there is a continuation of the “hope” across more than one verb.

Here, you can see that although there isn’t a new trigger verb, by adding QUE, the trigger is extended and thus requires another subjunctive verb to follow it.

With this in mind, now it’s time to look at the video and start adding these handy triggers to your spoken Spanish.